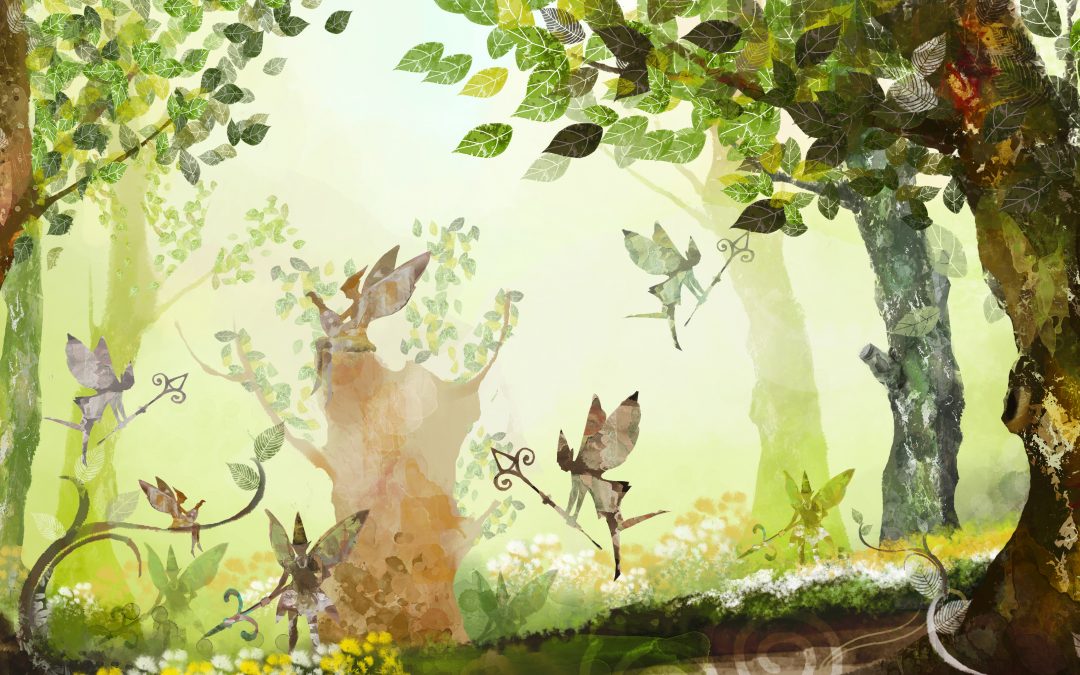 Though there are many Fae around us, as we fail to take care of the Earth, the Fae often choose to leave an areas to find Earth friendly places. It is painful for the fae to leave just because they believe their value there is not valued. So, with care, you can attract the Fae, and entice them back. There are many benefits to the fae being in our world. We actually need them for the health of the Earth. They are the original caretakers of the Earth, thus know better how to help the Earth thrive to its greatest health.

The fae folk leave because they can not better live in highly polluted areas any more than we can. As pollution effects our health, so it effects theirs. Imagine living in an area with hundreds time more polluted. This is what its like for these small folk. Being the guardians of the Earth, they believe it is their responsibility to keep the Earth healthy and thriving. Hence, they are used to living within the health they help create and maintain. By living in areas that are so healthy and clean their internal systems are evolved and acclimated to need this type of environment. Even though their internal system are accustom to living in a fresh healthy environment, they will go to less healthy areas to help bring an area back to a state of optimum health if they know their efforts will be supported.

Since the beginning of time the fae have ruled Earth and taken care of it. They worked in community with humans. However over time human’s became less and less careful about the care of Earth. Earth became simply property that was there to be of service. There was no longer a community need to take care of Each, rather it was only there to use to meet human needs. Imagine, living and working cooperatively along with someone taking care of something you considered precious. Then that co-worker no longer cares as much for this prized job, but rather wants to use it to their desires than with the intention of taking care of this item in its best interest. In general this is what happened for the fae folk and humans cooperative care of Earth.

Throughout time it is not all human’s who carried the belief the Earth was only to be used in service of humans, but enough so this became one of the reasons the Fae folk began to build an other realm to separate the fae from humans. For several years most humans could no longer see or work with fae. Albeit there have always been a few humans here and there who would commune with the fae. Throughout history there are the fabled stories of fairy tales and sightings. We are in a time when the veiled realm’s walls are thinner and we are beginning to hear more stories of fairy sightings.

It is becoming obvious we are more intrigued with developing a connection to fairies. Fairy stories are not only told and read, but popular in all areas of the media. This is also shown to be shown in the popularity of Fairy Gardens. And it is no longer considered as crazy to claim to see or sense a fairy or other presence. Sightings and personal experiences are more and more common and shared.

With these increased sightings we know it is possible to entice the fae folk back. To do this it is important to understand what we can do to draw them to an area they previously abandoned or to entice them out where they hid from humans.

Though I believe it is important to know which Fae are most often residing in garden areas and how they benefit an area, it is far more important we understand how to treat these fine folks.

First and foremost, the fae folk must always be treated with respect and kindness. A lack of respect makes fae hide quickly from humans out of a need for self protection and preservation of their kind. Though, it is important to make known, they like shiny items and if those shiny objects are left out many fae will take them to enjoy as their own or move them to an area they believe all can enjoy seeing the object. People often think they are being stolen from when a fae takes an item. This is the warning: most fae believe shiney items are public and made to be enjoyed. If you leave a shiny item out and they believe there is a better place to keep it, they will love that item. To the Fae it is a sign of mutual respect and public enjoyment to move shine items. They believe you are honoring them by leaving these things out to enjoy and when they move the items to a better place, they show their esteem for you by moving the item. As well, they do this to one another by moving another’s shine item to an even better place. This is a show of acceptance by the fae if they take or move items you leave out. If there is an item you don’t want moved, leave a kernel of pepper near the item. This signals the item it to remain where it is at. Only a very mischievous fae folk will move an item with pepper near to.

Since there are mischievous fae, it is recommended you work at attracting the positive good spirits.
-Speak kindly when you are outside. Many fear out anger and outrage. They will hide because they do not know if your intent is to hurt them. They are very self protective. They also believe anger and rage hurts the Earth so they don’t want to remain in an area where continual anger or rage is expressed. Of course they understand outbursts now and again but do not tolerate frequent outages.
-Tell them of your plans and intentions. If you have a plan for an area share your plans so they can help you achieve the desired result. The best way is to create and present a visual image of what you want. Though here is another word of warning; fae will alter those plans if they believe your plan is not for the best.
-Be in good health. The better your health the easier it for the fae to work with you. Many people are ill-tempered when they don’t feel well. If you are ill-tempered it gives the fae another reason to hide. However, if you talk with them about your ill-health they will make allowances and continue to work with you. They will not hide because they do not see ill health as negative , rather this is one way they can help you.
-Be grounded. The more grounded and have your energy centered in the Earth the easier it is for fae to know you are friend and have interests similar to their own.
-If you can, know which particular fae folk you have residing near you so you know how to best work together mutually.

Gardens attract many different fae folks. The most common are:
-Faerie – The most common and widely know Earthen folk. They are generally considered the most friendly and willing to be seen by people. They are often caretakers of flowers and plants. some will share their energy with stones so the gifts they share can be spread around.
-Trooping Faeries – These faeries are similar to their counterpart, the faerie, except they have chosen to evolve to be wingless. They are also seen as more serious and work with larger plants, like trees.
-Brownies – These fae are very adventurous, very social, and prefer to live in groups. They are also very industrious and like hard work. If you tell a brownie your plans they will work the hardest to help you achieve what you want.
-Fawns – People who live near heavily wooded and treed areas may have the joy of a fawn living near them. These are mischievous fae, though. Avoid eye contact as they like to trick the eye and draw people in with their mesmerizing gaze.
-Leprechauns – Though it is believed they all horde a pot of gold, the is not usually true. A few may have gold but most do not. They are keepers of resources. They are an advantage to a garden as they will bring in resources to help your garden and surrounding areas. They are very attracted to rainbows because they use the energy of the rainbow to filter water and honey into the finest mead known. Having a leprechaun means your garden will always be given what it needs. Though there are very few who want to live the outdoor garden life.
-Gnomes – These little folks tend to be shy. They are hard to see because they seek out and socialize with their own kind. Gnomes do enjoy living under and around flowers and vegetable areas, that are full of foliage so they can hide when people approach. They are very gifted at hiding.
-Pixies – These folks are the second best known. In a garden they will often specialize. Some will work in woodland areas, while others flower tenders, and even many who watch over surrounding areas to keep homeostasis in an area.
-Sprites – These small energy beings are often seen s bursts of energy. They bring delight and joy, simple smiles to a garden where they dwell. An especially advantageous sprite to a garden are the Water Sprite. They help water move so it stays fresh and clean.
-Mud Babies – Mud babies are not actually babies rather one of the smallest of the fae. They live in puddles and other water areas. Their primary job is to being minerals to the water so when butterflies and other animals come to drink the water offers them
nourishment. Mud babies also encourage water to come to areas that need water. If there is a drought mud babies will go dormant. If you have many butterflies and dragonflies you most likely also have mud babies.
-Elves – Elves are also well known. They are very protective. These folk also specialize, with most liking to work in the woodland areas. If you have a woodland elf in your garden your trees will drive if you allow them to work well with you.
-Trolls – Trolls seldom are seen in a garden. Occasionally they can be found in large garden areas. If you have a troll you will most likely have ruts and uneven ground. They do try to make sure voles, moles, gophers, and such do not destroy the dirt in your garden.
-Mer – Let’s face it this is one folk never seen in the usual garden. However a few with oceanic hydroponic gardens have wondered if they saw a mer tending to their garden. So I added this one for the novelty and fun. And if you have such a garden, please let me know. I will be in awe.

Look for part 2 to learn more about this topic.